The ISM measures adult participation in sport and physical activity since 2007. The current mid-year report provides an interim update on data collected during the first six months of the year January – June 2019. It is based on interviews with over 4,200 adults aged 16 and over.

The key finding is that 46% of the Irish population (approximately 1.78 million people) participated in sport at least once a week in 2019 compared to 43% for the equivalent period in 2017. This represents an additional 100,000 regular sports participants in the country.

Aside from the increase in active participation, improvements were also reported in the numbers taking part socially in sport while the gender gap declined as did the number of adults not taking part in either sport or recreational walking.

Speaking at the launch in Dublin today, Minister of State for Tourism and Sport, Brendan Griffin TD, welcomed the findings: “The Irish Sports Monitor mid-year report shows further progress towards the 2027 targets set out in the National Sports Policy 2018-2027. There has been encouraging increase in the number of adults actively and socially engaged in sport, meaning more people are benefitting from the physical, mental and social dimensions of sport and physical activity. It is also encouraging that the gender gap in active participation has narrowed slightly.”

Chairman of Sport Ireland, Kieran Mulvey, commented: “It is encouraging at this mid-point to see growth in the numbers participating in sport and also in social participation through volunteering, club membership and attendance at sporting events. The Board of Sport Ireland will continue to prioritise our efforts to increase participation right across all groups in our society. The insights gained from the Irish Sport Monitor are key to informing future actions in this regard.”

Olive Loughnane, Chair of the Sport Ireland Research and Participation Committee commented: “The ISM provides important data on sport, physical activity and social participation across the country. It provides valuable information to support decision making by the Committee.”

Speaking at the launch, Chief Executive of Sport Ireland, John Treacy, added: “The Irish Sports Monitor helps to inform Sport Ireland of social factors that affect participation in sport and identifies key groups that are not participating or have a low level of participation. This knowledge and insight informs our attentions and actions. The mid-year report is encouraging overall, and results are moving in the right direction.”

Data collection for the 2019 Irish Sports Monitor is ongoing until December 2019. As a result, the findings provided in the Mid-Year Report should be interpreted with caution as they could change once data collection is completed and data weighting is finalised.

A copy of the 2019 Irish Sports Monitor Mid-Year Report can be downloaded here. 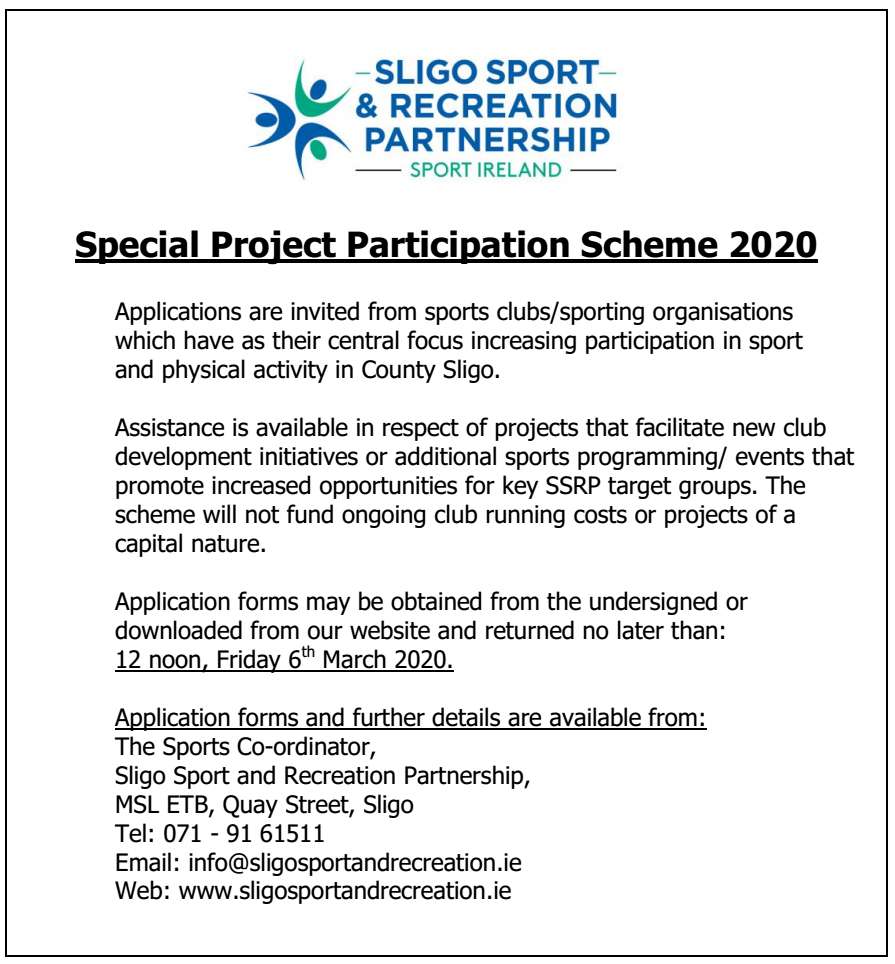 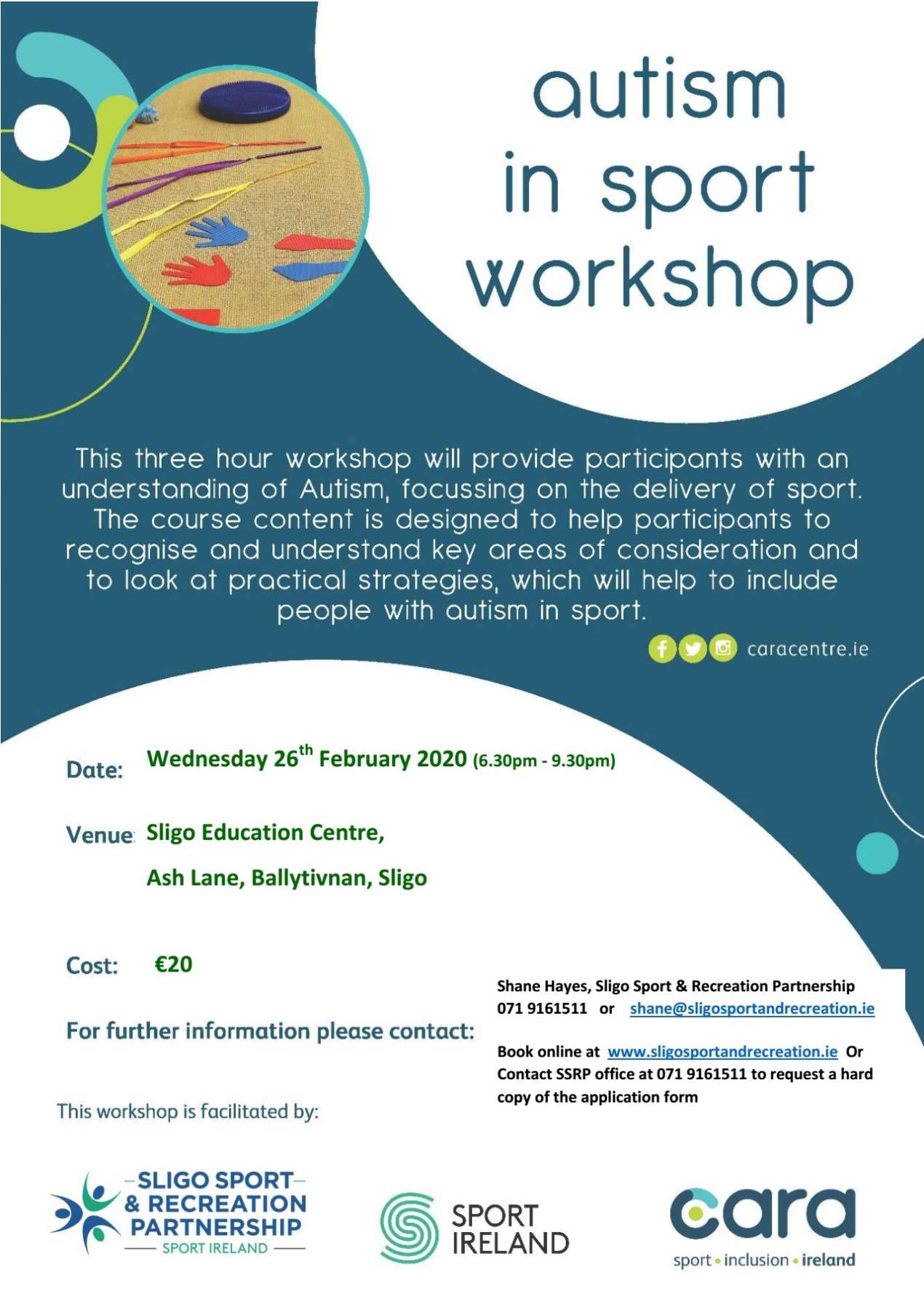 Once again Sport Ireland and Local Sports Partnerships around the country have teamed up with RTE’s Operation Transformation programme to encourage people to follow a healthy lifestyle in 2020. This popular TV programme encourages and inspires communities across the country to get active and adopt healthy eating habits. Why not get your New Year’s Resolutions off to a great start and adopt your own ‘Physical Activity Transformation’ by joining Sligo Sport and Recreation Partnership and local community organisations on Saturday 18th January 2020 for the Operation Transformation National Walks at three locations across County Sligo. SSRP will facilitate a walk on the Sligo Town Sli na Slainte route along Doorly Park starting at JFK Parade. South Sligo AC will host a walk in Tubbercurry starting from the Square, while St .Molaise Gaels will lead out on a walk from the carpark in Grange. The distance of the various walks will range from 3km to 5km. All walks will commence at 11am with assembly and warm up from 10.45am onwards. For health and safety reasons we would please ask people not to bring dogs along to the walks.

Sports Co-ordinator Deirdre Lavin is encouraging everybody to get involved in the walks stating; “People of all ages and fitness levels are welcome on the day and in particular it would be great to see families getting involved. The events are ideal for beginners to come out and give exercise a go”.

Download News Active our latest Newsletter covering some of the programmes, activities and events that have been happening in Sligo Sport and Recreation Partnership over the second half of 2019… 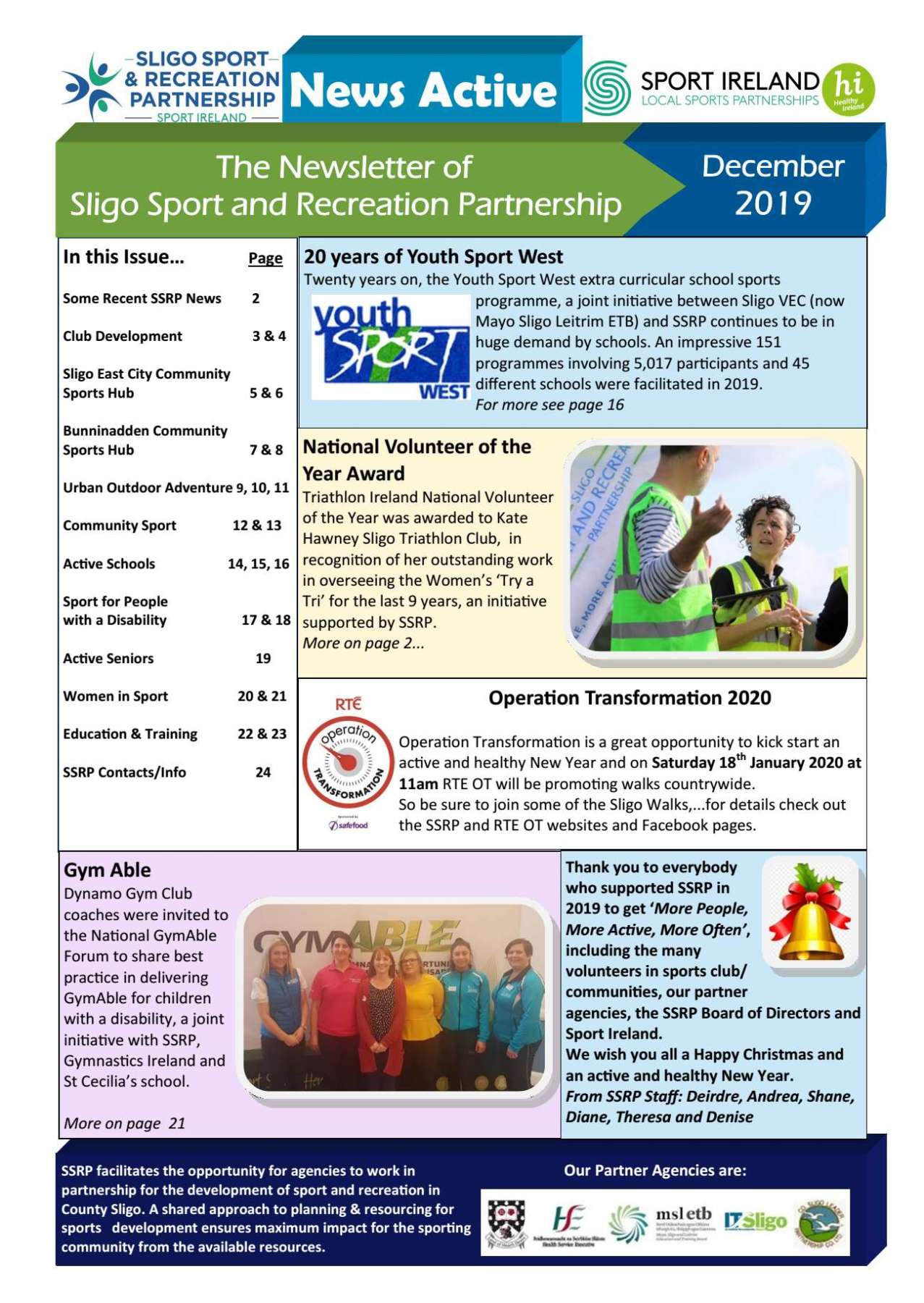 GymABLE Delivers Gymnastics For All

The Sligo based GymABLE programme co ordinated by SSRP and Dynamo Gym Club with support from Gymnastics Ireland has been recognised nationally as a model of good practice when it comes to providing Gymnastics opportunities for people with disabilities. The programme targeted children with a range of disabilities from St Cecilias School and was highlighted at the National GymABLE Club Forum hosted by Gymnastics Ireland in December 2019. The forum targeted club managers, coaches and members who have an interest in developing Gymnastics programmes which are inclusive of people with disabilities. The local GymABLE programme addresses one of the key actions outlined in the National Sports Policy around inequalities which exist in terms of sports participation opportunities for children with disabilities in comparison to their non-disabled peers. The collaborative approach adopted involving SSRP, DyNamo Gym Club and Gymnastics Ireland  and St Cecilias School ensures the programme is of a high quality and accessible for all.

Watch this short video for an insight into the programme

Coaching Ireland have developed 4 modules, specifically to provide coaches with a basic understanding of children’s sport and physical activity and best ways to optimise children’s enjoyment, participation and positive outcomes. The concepts of Physical Literacy and Holistic Development run throughout the series of workshops. Each workshop is 3 hours in duration and is a combination of theory and practical learning, each coach will receive a bank of games covering balance, co-ordination, speed & agility and inclusive& adaptive games.

Limited places are available on the course and pre booking is essential as it is on a first come first served basis. Book your place before the 6th November 2019.

Workshops will take place on

NOTE:   PARTICIPANTS MUST BE 18 YEARS OF AGE TO COMPLETE THIS COURSE

ALL 4 WORKSHOP MUST BE ATTENDED TO RECEIVE CERTIFICATION 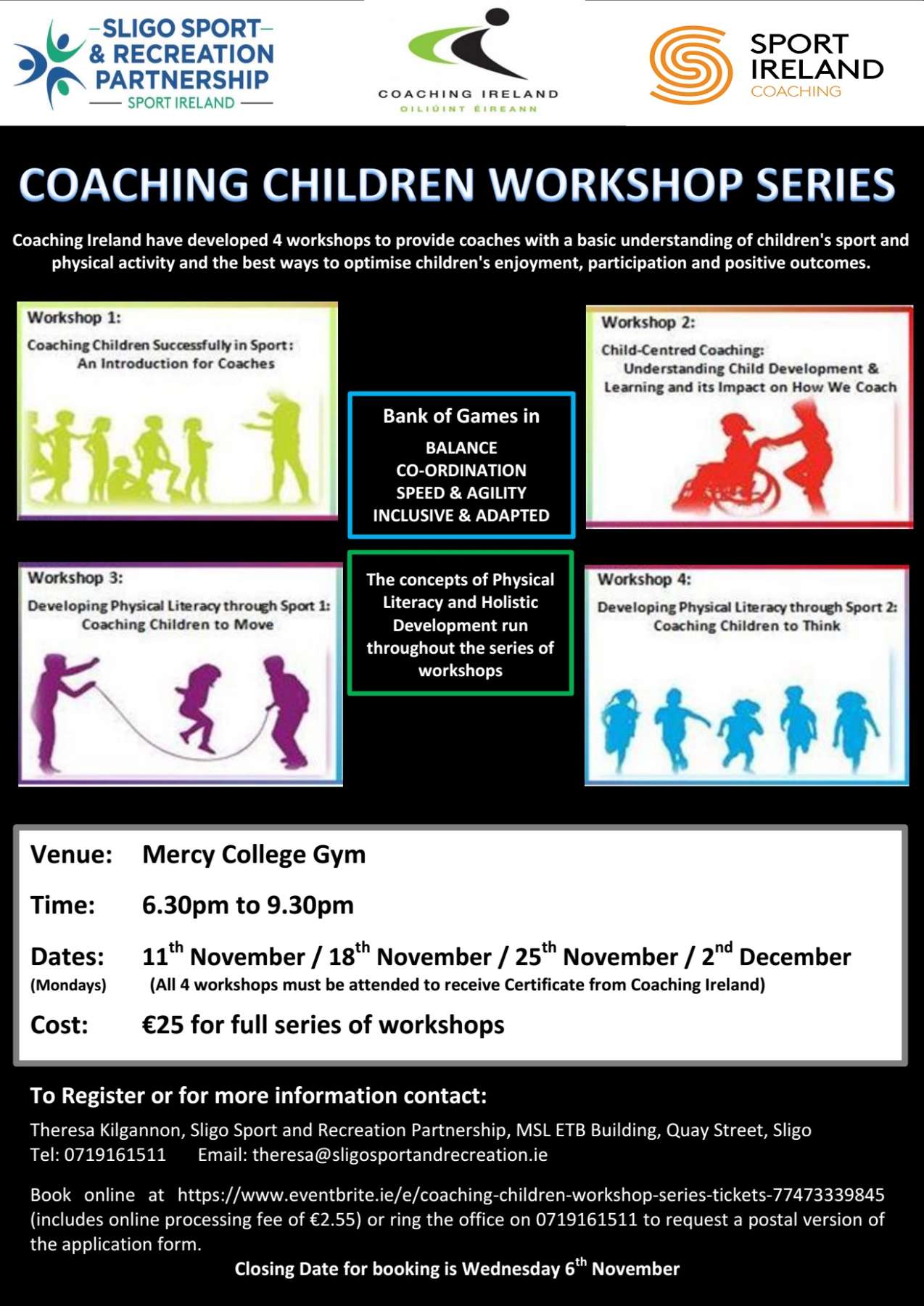 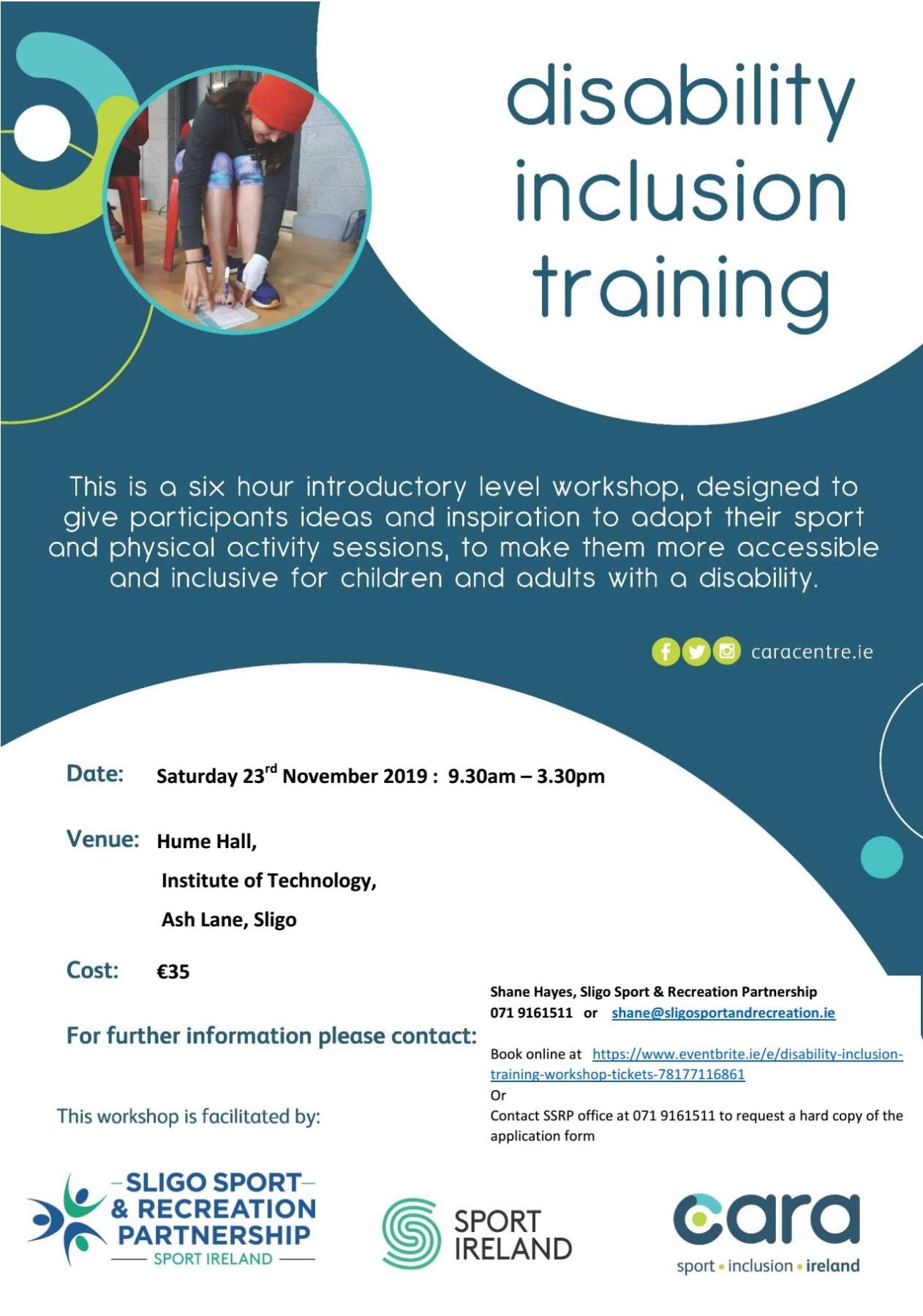 Nominations are now open for the Cathaoirleach’s Awards 2019

Sligo County Council Cathaoirleach’s Awards have just recently been launched in County Hall.  The Awards scheme was introduced to honour people who have given special, voluntary service to their community.  The Award categories are:

Each category winner will be awarded with a specially commissioned presentation piece at an Awards Ceremony at County Hall on Wednesday 11th December, 2019.
A copy of the nomination form can be downloaded HERE  and is also available for download from Sligo County Council’s website at www.sligococo.ie

The closing date for receipt of nominations for the 2019 Awards is Thursday 21st  November 2019.

Dress appropriately for the weather / Wear sturdy footwear, waterproof trousers (NO JEANS) , hat and gloves / Carry a backpack to bring water, snacks and spare items of clothing / Children must be supervised by an adult at all times / For safety each adult may be responsible for a maximum of 3 children aged 8 year+ and a maximum of 1 child under 8 years / Adults should not carry children on their shoulders on in their arms as the ground is uneven and this would be dangerous / Walk routes are not suitable for buggies / No Dogs allowed on the walks

Book your place at this link – https://www.eventbrite.ie/o/sligo-sport-and-recreation-partnership-26214188755 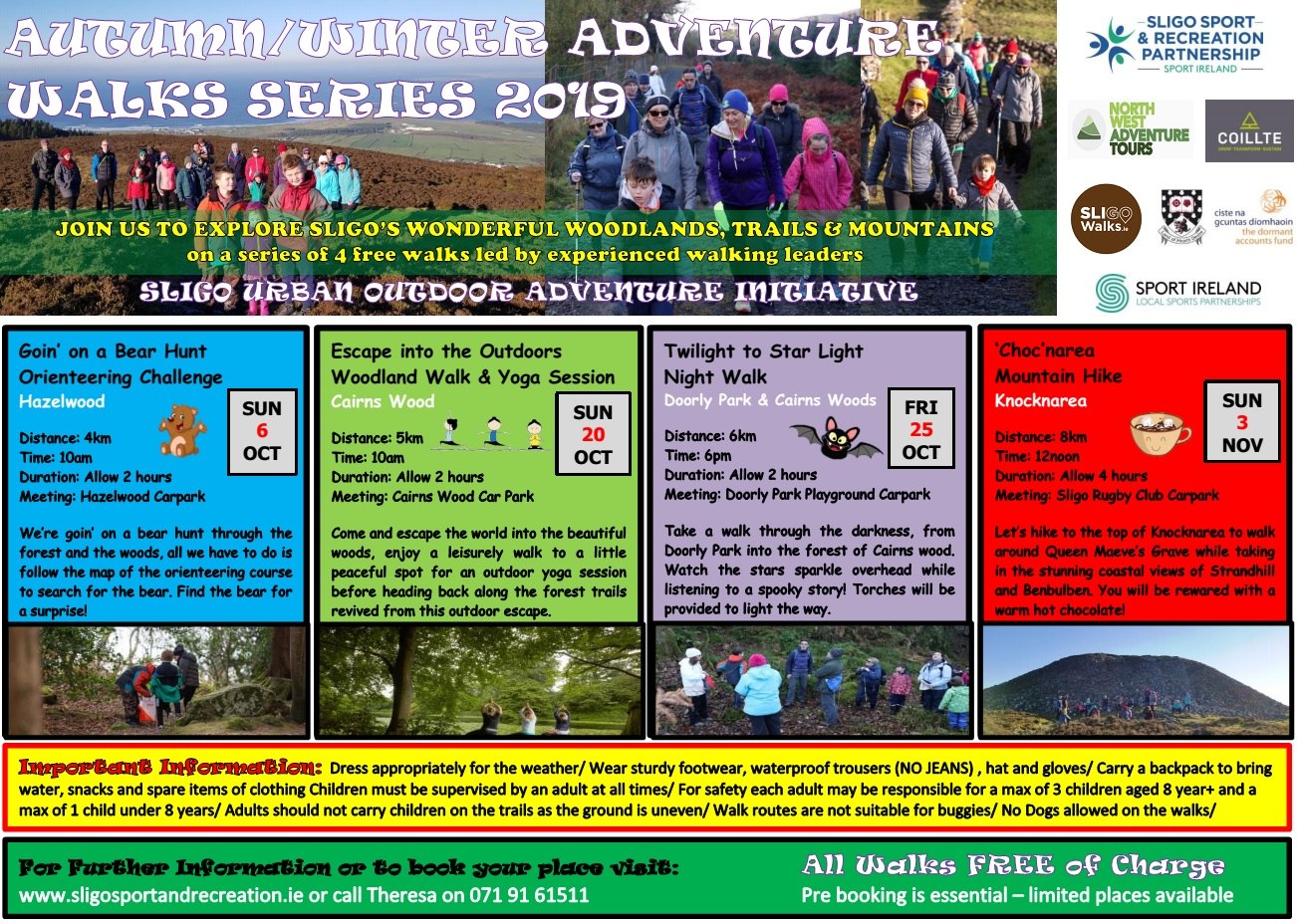