‘Sport and Recreation: A Way of Life in Sligo’ Video

Sligo Sport and Recreation Partnership would like to say a huge thank you to everyone who came along to the Launch of Our New Strategic Plan – Building a Culture of Sport and Physical Activity in Sligo 2018-2023 yesterday evening. It was fantastic to see such a range of sports clubs and communities from across Sligo represented on the night. Thank you for all your support.

People of all ages and fitness levels will have chance to put on their walking shoes and get active as part of the upcoming Sligo Spring Walks Series. Taking place over a 4 week period commencing in early February there are a variety of walks planned and newcomers to walking are particularly welcome. All walks are along defined trails and walk leaders will be on hand to lead the walks at a pace appropriate to the fitness level of the group.

See our poster below for full details… Download Poster HERE

The sun shone down as over 450 children completed the 2017 Primary Schools Try a Triathlon. The event organised by Sligo Sport and Recreation Partnership in partnership with Triathlon Irelands Junior Development Officer with assistance from Sligo Triathlon Club, was hosted at Sligo Regional Sports Complex and Cleveragh Regional Park on the 26th October. These facilities offer an ideal location for children to take part in the swim, cycle and run elements of the event as the park provides a large safe space away from the public road.

The day saw perfect calm conditions with a bright sunny sky. From 12.30pm the children started to arrive, they racked their bikes and got their numbers on before heading to the race briefing at 1.30pm. The event involved a 25m swim, 1.5km cycle and a 800m run for 3rd and 4th class and a 50m swim, 3km cycle and 800m run for 5th and 6th class. Over the 2hour slot from 2pm to 4pm all 450 children completed the event. No times were recorded, as this was purely a non-competitive event with the emphasis on fun participation and completing the distance. This created an enjoyable atmosphere for the children and was evident from the buzz and excitement around the venue, not only from the children but from the large supporting crowd of parents, teachers and friends who came along to cheer everyone on.

This event would not have been possible without the large number of volunteers who gave up their time to marshal, over 70 volunteers helped on the day. The organisers would like to thank Tommy Cradock and the Sligo Grammar School TY students, Pat Tuohy and the Summerhill College TY Students, Eimear Donlon and the 4th Year Health Science Students from IT Sligo, Sligo Triathlon Club volunteers, the parents who put on a high-vis jacket and helped out and the Gardai for managing the traffic at the road crossing. We would also like to thank Sligo County Council for making the park available to host this event and Sligo Race Course for providing parking facilities.

Theresa Kilgannon Youth Sport Development Officer said “This event is a brilliant opportunity for children who may not like team sports to sample an individual sport where they get to use a broad range of skills from swimming, cycling and running in an unpressured environment and gain confidence from the achievement of completing a triathlon” 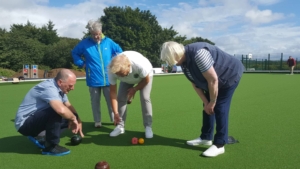 Lawn Bowls is a competitive sport which dates from the 12th century, which is easy to learn, provides gentle healthy exercise as well as pleasant social company for people of all ages. After a successful Adult Come and Try Lawn Bowls programme led by Sligo Sport and Recreation Partnership at the new Sligo Lawn Bowls Facility, a steering committee of local bowling enthusiasts was developed, who have been working towards developing Sligo’s first Lawn Bowls Club. The club committee are now looking forward to celebrating a great sporting milestone for Sligo, as they prepare to launch on Saturday 15th July at 11.30am, where they hope to welcome club members, guests, local bowling enthusiasts or anyone interested in Lawn Bowls and wants to know more about the game.

Activities on the day include an exhibition game with Sligo Lawn Bowls Club players, followed by ‘Come & Try Lawn Bowls Sessions’ allowing people a chance to have a go. All equipment will be provided. All that is required is to wear wear flat soled shoes.

Access to the facility is via the main car park in Cleveragh Regional Park, which is located across the road from Sligo Regional Sports Centre.

This facility and club development project is part of the Sligo Sport and Recreation Partnership East City Community Sports Hub initiative funded by Sport Ireland under Dormant Accounts and supported locally by Sligo County Council and Cranmore Regeneration. For further information on this project please contact diane@sligosportandrecreation.ie or Tel 0719161511.

Sport Ireland has gone live with their online Safeguarding 1 Refresher, a web based education resource aimed at providing further training to those who have previously attended a Safeguarding workshop or equivalent.

The content contains four modules which will provide persons in roles with regular responsibility for children an opportunity to learn about:
best practice procedure; understanding of why safeguarding children and young people in sport is important; recognising the different categories of child abuse and identify the signs of abuse; and the responding, recording and reporting issues of poor practice or abuse.

The refresher course content was developed by Sport Ireland and Sport Northern Ireland in collaboration with welfare officers from a number of National Governing Bodies for Sport.

The web resource was designed in collaboration with Ineqe Group, who specialise in safeguarding and child protection, both in the offline world and in the digital world.

To undertake the online Refresher training clink on the following link below. Following completion of the online training you will be issued with a digital cert. Please note this digital cert is only valid in conjunction with your original Safeguarding 1 certificate.

Minister of State for Tourism and Sport, Patrick O’Donovan TD, today launched the sixth Irish Sports Monitor report, for the year April 2015-April 2016. The report, written by Ipsos MRBI on behalf of Sport Ireland, measures adult participation in sport and physical activity and compares it with information published for previous years. The report shows that 45% of the adult population participate regularly in sport equating to approximately 1.6 million people benefiting from the physical, mental and social benefits obtained from participating in sport. Overall personal exercise is the most popular activity (13.7%) with running (8.2%), swimming (8%), cycling (5.5%) and soccer (4.8%) the next most popular.

Speaking at the launch, Minister O’Donovan commented: “The Irish Sports Monitor provides us with vital insights into the role sport plays in not just encouraging healthier, more active lifestyles, but also in fostering community spirit and developing social capital right across the country. In that regard, it is encouraging to see such strong numbers engaging in sport through volunteering, club membership and attendance at sporting events.”

Kieran Mulvey, Chairman of Sport Ireland commented “I am delighted to see that the report also shows strong levels of social participation in sport through volunteering, club membership and attendance at sporting events. Team sports such as Gaelic football, soccer and hurling/camogie have the largest numbers of volunteers. Social participation in sport is very important, not just in terms of supporting sport and sporting organisations but also in maintaining the social fabric in Irish communities.”

John Treacy, Chief Executive of Sport Ireland, said: “This report shows that the level of sedentarism continues to decline and the latest figure of 12.1% is the lowest since the Irish Sports Monitor was initiated in 2007. However we cannot afford to be complacent. Following a number of years where we have seen increasing levels of involvement in sport, the current report has identified a slight decline in participation from 2013 driven primarily by improved economic conditions and associated time pressures on particular groups. Understanding the factors behind this decline is important in allowing us to focus attention on these groups. Sport Ireland will continue its work to increase participation in sport and reduce the level of sedentarism with a range of programmes and initiatives implemented through the National Governing Bodies and Local Sports Partnerships.”

Kieran O’Leary, Research Director, Ipsos MRBI, added: “The Irish Sports Monitor continues to demonstrate the significant role of sport in Irish society with 1.6 million people actively playing sport each week, and a similar number having another role through volunteering, attending an event or being a member of a club. However, differences exist across the population and challenges remain in increasing sports participation, particularly amongst females, older age groups and those not in paid employment.”

Ríth 2016 is set to begin at Celbridge House, County Kildare, on 4 March 2016. The relay run will last eleven days until it ends with a concert by Seo Linn in the heart of Dublin on the 14th of March. The Sligo leg will take place on the 10th of March. The route for the Sligo leg of the event can be viewed here: https://www.rith.ie/en/buy-a-kilometre/Sligo/

Rith 2016 is one of the main events to commemorate the 1916 Rising. A 700km course has been set for a relay run around Ireland, a baton changing hands between people and groups every kilometre.

The inaugural Rith event was held in 2010 with a 1000km course starting in which 10,000 people participated over 9 days. The second run was during 2012 and attracted 27,000 participants. More than 30,000 took part in Rith 2014. The runners carried with them a message of support for the Irish language from the President of Ireland, which was enclosed inside the race baton. The message is passed from runner to runner and kilometre to kilometre until it is read out at the end of the event.

Each kilometre will be sponsored by individuals, schools, community groups, businesses or other and cost €100. It is not necessary to buy a kilometre in order to take part, but it is those who buy a kilometre who will be to the fore of the run with the President’s message. A list of the towns can be found at www.rith.ie. Further information about Rith 2016 is available from eolas@rith.ie.

Check out the ‘Want2Move Sligo East City’ Activity Guide which features Sport and Recreational Programmes, Classes and Events for Youth, Families, Adults and Seniors. This initiative is part of the Sligo East City Community Sports Hub.